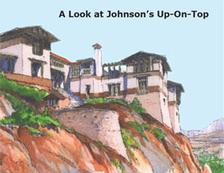 May 2, 2002 - Sparks fly at Cloudrock meeting as board of adjustments questions conflicts of interest

March 14, 2003 - Living Rivers and Grand County Citizens for Clean Water launch a campaign to protect the water supplies of Moab and Spanish Valley from innappropriate development. See full-page ad from the Times-Independent.

May 8, 2003 - Lawsuit launched against Grand County over illegal action on SITLA properties at Johnson's-Up-On-Top for a development called "Cloudrock."

August 2006 - Cloudrock brainstorming sessions to be held in Moab this week.

December 13, 2007 - Board of Adjustments vacates PC approval of special exceptions for Cloudrock

March 14, 2008 - A Look at Johnson's Up-On-Top. A publication of Grand County Citizens for Clean Water